The latest UK personal debt statistics from the Money Charity can be found below.. 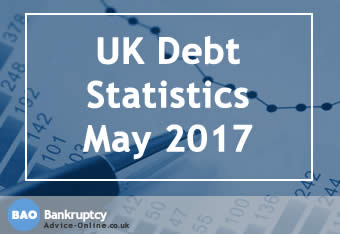 The average total debt per household – including mortgages – was £56,632 in March.

Outstanding consumer credit lending was £197.4 BILLION at the end of March 2017.

This means at the average credit card interest rate it would take 25 years and 11 months to repay if you made the minimum repayments each month.

Debts Written Off By Banks

UK banks and buiding societies wrote off £640 MILLION of loans and credit card debt to individuals in quarter 4 of 2016. That's roughly £7 MILLION a day.

248 people a day are declared insolvent or bankrupt. This is equivalent to one person every 6 MINUTES 13 SECONDS.

Previous UK personal debt statistics from the Money Charity can be found here:

Produced from the statistics provided by the Money Charity

Making yourself bankrupt is a big step to take and requires expert debt advice.

If you haven't already received advice from us and are considering how to go bankrupt, you can use our online bankruptcy test tool, which will provide you with a a free assessment of whether you qualify for bankruptcy and what impact it will have on your current situation. We'll also send you our "Free Guide to Bankruptcy" by email.

Bankruptcy can be an effective way to solve personal debt, however it should ALWAYS be considered as a LAST RESORT, and the Court will expect you to HAVE considered any alternatives that you may qualify for.

Before you apply to go bankrupt make sure you're certain you've considered the following questions:

Our panel of specialists can quickly advise you on what to do if you are considering going bankrupt. Simply call the team FREE on 0800 368 8231.
Alternatively take the online bankruptcy test and check if you qualify.

How To Deal With Debt Collectors

Have you received a letter or call from a debt collection agency. In this guide we'll expain how to deal with debt collectors...

Check now online whether bankruptcy really is your best option?

I didn't realise I could get help with my debts. So glad I contacted them, so helpful and understanding.